A Leo Full Moon ♒️🌝♌️ does not typically have REALITY CHECK written across the dance of complementary opposites ☯️ highlighted in this particular lunar cycle testing what we mean when we say Lover, or even friend.

But there weren’t any preceded by the CAPRICORN NEW MOON EXACT PLUTO burning the 2021 NEW SUN into the human psyche as the ultimate primal reality check.

So much has happened in the fortnight since the New Sun four posts ago that the necessity of fully surrendering to the 27 January Moon opposing Venus /Pluto comes from sheer psychic exhaustion. This primal energy fueling the Leo/Aquarius dance demands STILLNESS for absolute introspection.

This is precisely what the Leo Full Moon ♒️♌️ 🌝 does: illuminate consciousness of thoughts and opposing passions, bringing them into play with the potential for the very high drama that cool Aquarius struggles to avoid. This primordial energy of Kali building in our conscious awareness via today’s Moon opposition Pluto (YES, it is happening to you by reading this!) bursts out into positive life-affirming heartfelt expression — but only if we have succeeded in tossing aside our gadget love as the passage of opening ourselves to Reel Uncertainty. What I mean by this cinematic term 🎥 is through a detachment that observes our own life like a movie.

This eruption triggered the timing of the writing of this post at high noon. The the exact Mon opposition Venus/Pluto is on my Astro calendar for 12:55 EST, the targeted moment of this publication.

The exact Moon opposition Venus/Pluto is 12:55 EST as the elective moment of this publication driving the urgences of the message. It was published at 12.58 under this horary chart. The North Node conjunct Gemini Rising captures this moment of the struggle (North Node) to communicate Truth.

As it happened, the catalyst to write the New Moon posting under this REALITY CHECK configuration was Chris Hedges, just about the only American journalist speaking the TRUTH, which he admittedly achieves through his global perspective as a foreign correspondent reporting on structural breakdowns of nations in turmoil.

My quest to leave the media Ivory Tower in 1984 took me to Buenos Aries after the loss of the Falklands War to live the bodily effects of the breakdown of consensus reality which resulted in Champagne Tango turning me into a novelist. It is postmodern from a holistic perspective of a new modernism.

This acting entirely from the body by means of the primal energy of Moon in its ruling sign opposing Pluto. This sheer vegetative communication is feeling is foreign to my Aquarian brain. I typically have my time scheduled by my astrology calendar, a preconceived quantum reality ruling those born under the influence of Uranus

So, what is this Moon/Pluto Opposition, the first with the Moon in its ruling sign of Cancer without the restraint imposed by Saturn (now directly on my Sun at 4 degrees Aquarius)? My words right now reveal it is a rare X-ray illuminating Pluto in Capricorn, the sign ruling the patriarchal structures breaking down under the primordial energy of Pluto.

The external force unleashed under this lunation begins the process of conscious embodiment, the very necessity of doing so due to the prolonged methods of Shadow projection in the earlier part of this Pluto cycle that began in 2008 with a bang reverberating across the globe as the financial collapse followed by the US bailout.

So, 25 hours from the Thursday 28 January Leo Full Moon, we have the hard core initiation under quarantine (with a nightly curfew here in Montreal) into the crucial four final years of Pluto in Capricorn. That this is the most crucial time in the 16 year total passage is clearly marked by the US Pluto Return (28 Capricorn).

As the signs of external control deepen under technology on Aquarius steroids under the effects of the Great Conjunction, the more crucial it is to become conditioned to listening to the body for deeper truths. This is the truth of universal law that humanity has traditionally read in the cycles of the heavens. In studying the ancient practice of astrology to understand the effects of the stars on humans, we find objective truth of the sign of Aquarius. This is the dramatic (LEO!) shift of value and the valuation of art revealed in this unique Full Moon revealing the current stress levels associated with the collective requirement of Hieros Gamos embodiment as the only authentic path to soul liberation.

This is the message my body wanted to communicate at the crucial moment (North Node conjunct the Ascendent) of the Moon opposing Pluto. We are being asked by the collective body to understand our external resistance to control mechanisms and how this resistance feels inside.

Taking away the external projection is the first step to the authentic liberation of the Leo Full Moon.

I have been lead into celebrating the REALITY CHECK of my chronological age by my sister’s birthday gift of my own tarot card publicizing the numerology (9) of my age in this key 2021 year of CHANGE.

So, I have taken you, my reader, on my passage in REEL TIME, one AstroPortrait after another to chronologically clock my leap into Kairos. This is what I am hoping to achieve through mapping 15 I Ching throws 12 hours apart in Fortnight of Quantum Change.

The I Ching throw #15 for 12 AM on 27 January forecast the timing of this posting. Today’s Moon opposing Venus Pluto horoscope was intended to be the elective choice for the business of decreasing (26 Jan throw # 14) my small mountain of unpublished literature!

Here is the Möbius strip of inner/outer and as above/so below at work in Limitation, #60 (Bottom Right).

The self-creation SCIENCE OF MAGIC methodology for creating internal structures, and thereby being grounded by the internal security of Self-control, is the message my body wanted to communicate to my readers at the crucial moment my body was being used as a vessel communicating (North Node conjunct the Ascendent) the effects of Moon opposing Pluto on the body!

We are being asked by the collective body to understand our external bodily resistance to control mechanisms and how this external resistance feels emotionally inside our body.

Taking away the external projection is the first step to the authentic liberation of mind and heart that is the promise of the Leo Full Moon square Mars/Uranus/Lilith conjunction in the sign of the body, Taurus. Discourse on what this means entails a new posting once the actual Leo Full Moon penetrates my Psyche.

A short documentary of a man who lives without money.

RIDE THE CREST OF THE CRASHING QUANTUM WAVE: KUNDALINI NEWSLETTER

THE ART OF THE QUANTUM NARRATIVE

I will be presenting my decades-long tracking a dark energy/kundalini aesthetic in art at this conference on Saturday.
#2222022
#freedomconvoy2022 #canada🇨🇦 #gayvillagemontreal #vaccinepassport #covid #covid-19 #quantum #quantumphysics #butterflyeffect
HAPPY NEW YEAR!
THE GREAT ☿☉CAZIMI AWAKENIING
The PEACE that this historic 23JAN AMERICAN HOMECOMING represents is the ontology of the AQUARIAN BEING entering the collective under the primal power of this extraordinary WOLF MOON 2022. 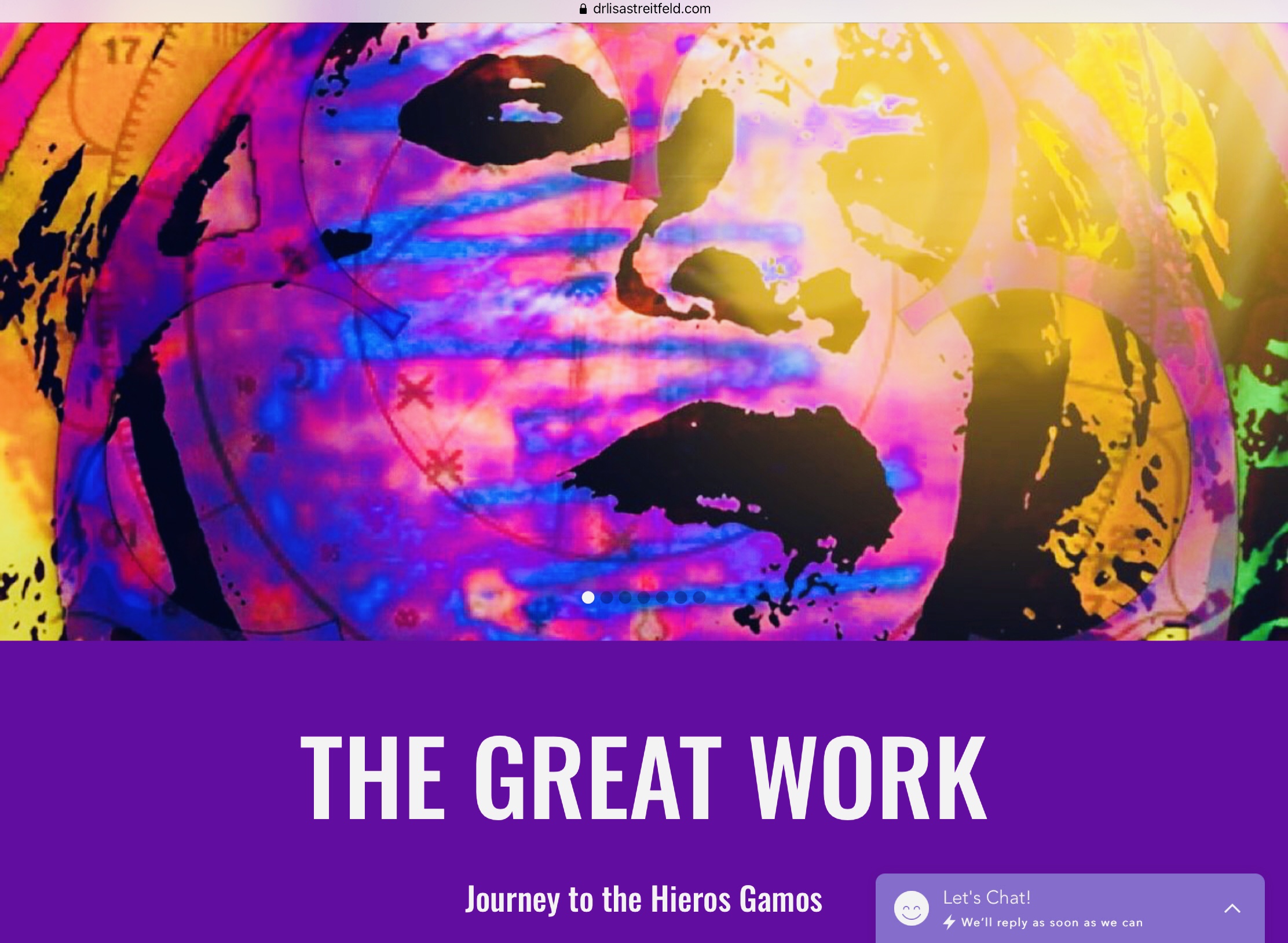